Socialism is for Kids

Socialism is for children not yet capable of surviving in the real world.

It is the T-Ball training for the major leagues of the Free Market competition and Individual Achievement.

Socialism protects from the rigors of competition but also limits individual achievement.
Would we have a Mickey Mantle or a Cal Ripken if they were forced to play with third graders?

Socialism, like T-ball, is not enough of a challenge to those with more mature skills and will stunt individual growth.

As Children we need to be equal, get rewarded even for small steps, learn to "share and share alike" and dumb down rules to the lowest common denominator. We need an artificially safe environment with graduated steps and challenges to build our skills and self-esteem.

As children we need the support of training wheels or big daddy to ride our bicycles and we don't ride very far.

As adults we need to flex our muscles and compete.
As adults we do not need a big Daddy or Government to make sure we all play together nicely.

Those adults that desire a collective system (Collectivists) such as Democrats, Leftists, Communists, Fascists, Socialists and enviromentalists are afraid to grow up and face the world of competition and reward by merit.
They are afraid they will fail in a game where we don't all get a prize just for showing up.
They are afraid to fall off the bicycle and never learn to ride on their own

Collectivist Peter Pans are still flying around in their cardboard box spaceship where the world is perfect and they are in control. They refuse to think out of the box and confront reality. Instead they try to impose their illusion on the rest of the world.

Collectivists use propaganda and censor speech so as not the break the illusion.

If you break the illusion they throw a tantrum and kick you out (Fired from your work), ostracize you (Blacklisted, Jailed), make fun of you (Show Trials, Slander, Libel, rewrite history) or hit you (Torture, re-education camps, death squads).

Collectivism on a large scale is economically, physically, spritually and mentally destructive. It fosters sloth, corruption and evil.

So grow up! Throw away your training wheels and ride with the free market. Compete and be your best!
Posted by BrerRabbi at 9:16 AM No comments:

The root of all evil

Most people can't adapt to the world so they try to adapt the world to themselves by controlling it or they hide from it in a group of like minded people that create their own reality.

Those that want to run away from the world gravitate to the controllers because they feel safe in a group where everyone is forced to think alike and act alike. They want to be controlled because at least then they know the rules. The more powerful the leader the better because the rules won't change. The world of individuals and possibilities is too scary to them.

This is a weakness of Humanity that we have not addressed. It is the root cause of all economic chaos, wars, poverty and can rightly be called the root of all evil.

The capable, independent, smart, moral, compassionate, loving winners are in the minority of the great unwashed losers.
Those that are qualified don't seek power so we eventually get a government of the Stupid by the Stupid for the Stupid.
Posted by BrerRabbi at 1:12 PM No comments:

Ever wonder why the worst, dumbest and most corrupt politicians keep getting elected over and over again? And the more they get elected the worse they become?

Our system rewards the fattest pig. 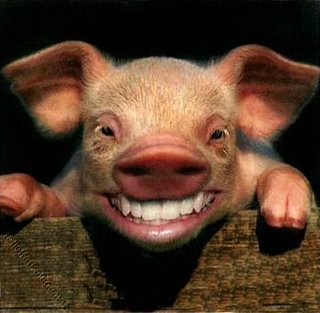 Congress steals most of our earnings and they put it in a big trough called the treasury. The pigs fight over how much of our treasure each one gets to slough off for their district. The more senior the pig the better it is at making the deals to get more share of the ill gotten gains.

As long as our local selfish special interests gets a lion's share of the booty we will keep electing and funding the same pig.

We no longer care how much the government wastes on the non-productive collecting and distributing of our treasure. We don't even realize how control of our wealth forces us to dance to their tune for our supper.

The sleight of hand of thievery that turns public interest into selfish interest.

It's the diametrical opposite to the invisible hand of competition of the free market that transforms our self interest into public interest by each individual maintaining their business and themselves at peak productivity and intelligently distributing wealth by merit.

As long as you continue to be jealous of your neighbors wealth, that jealousy will be taken advantage of by the con men to persuade you into allowing the age old scam of "taking from the rich to give to the poor".

Wake up and smell the Socialism!

There aren't that many rich people. Once you give them the right to steal they break into your house too. You may not have as much money but there are much more of you.

Of course they don't literally break into your house. No. The pigs in Government are too fat to work that hard. They force you to bring your wealth to them. Can't you hear the Godfather theme playing? Pay your protection money or else. You need a little time; don't have the money yet? No problem. Pay the vig; interest and penalties. If you don't pay the loan shark we confiscate your house, belongings and anything of value and then put you in jail to rot.

Repeal the 16th amendment that gave the Socialists the power to directly tax you and put term limits on the pigs in Congress and the Senate!
Posted by BrerRabbi at 6:50 AM No comments: