This is what they teach in high school

This flyer was handed out to students studying the history of the Cold War at Roosevelt High School in Des Moines, Iowa.

The CAPITALISM side of the flyer shows workers in tattered clothing, chained to a machine that delivers all of the money produced to a cigar-smoking (Russian) man who is also much better dressed.

Over on the COMMUNISM side, there is no boss and the smiling workers are better dressed, don’t have chains on their legs and the money goes back to them.

Communism stands for equal sharing of the work according to the benefits and ability. But in Capitalism an individual is responsible for his works and if he wants to raise the ladder, he has to work hard.
While the profit of any enterprise is equally shared by all in Communism, the profit in the Capitalist structure belongs to the private owner only.”

Not just profit; also belonging to the owner is the risk of the owner’s capital, cost of raw materials, maintenance of the machine/premises, electricity and other utility costs, fire/flood/liability/workers compensation/unemployment and other insurance, political/mob/union payoffs, property and other taxes, marketing of the product, paying the workers salaries and benefits and many other expenses. Profit is what is left and the incentive needed to motivate an owner. Without that motivation, no system of economics works. Will the workers pool together to do what the owner did? Do they have the skills or the connections with other people and businesses? Will the State (corrupt Politicians) have enough interest in doing what the owner does? And if so how much of the profit will go to the workers? In fact why should the state pay the workers anything? Why not use the stick of KGB secret Police, torture and imprisonment rather than the carrot of better wages? The central planners set the wages and the prices.

The philosophy of every corrupt civilization has been the same - as long as the people have bread and circuses they will not rebel and the corrupt ruling individuals take as much as they can before the whole thing collapses.

What the cartoon doesn’t show is that under Communism there would be quotas, multiple party bosses, spies and enforcers to replace the boss. The machine would not have any energy to operate because their backwoods town has no political connections. Rather the energy is directed to the foundries creating war materials to protect the corrupt rulers and the connected at the expense of the workers who don’t work very hard and are drinking vodka 24/7.

There would not be any nice clothing available due to shortages because tailors have no incentive to work and are drinking vodka 24/7. Besides, Party planners have decreed that wearing nice clothing is not uniformly fair. In fact there would be no machine because the party has decreed that the workers are better allocated for the good of the Party as ditch diggers where half of them will die of heart attacks and heat stroke the first month and another half would be sent to Siberia for talking badly about the Party.

Any rubles they did have saved would be rendered worthless by the party leaders declaring it so or by printing so many rubles to pay for their 5 year plan programs and riches for themselves and their connections that the value of the ruble sinks to nothing and causes hyper-inflation so that nothing is affordable to any worker who would then have plenty of work chopping wood for fires because there is no energy to keep warm and hunting for meat to hide from the Commissars’ re-distribution. Eventually the animals and the forests are all gone and the people starve to death.

Even Karl Marx said that Communism is unworkable due to human nature. The fat cat rich person doesn’t go away. It just moves into the government where they get vastly increased power to steal and enslave. Realistically, Human Nature requires incentives to work such as private property rights, control of business corruption through competition which also creates innovation and strict control over government power to prevent the effects of inevitable corruption. Only America has ever implemented such a system. Unfortunately that system was broken by 20th Century amendments and legal usurpation of the Constitution. Not to mention vast amounts of Soviet and other Communist/Socialist propaganda.

The US did not truly win the Cold War. The Soviet Union collapsed because of their own failed centrally planed and corrupt Communist/Socialist government and economy as well as the rebellion of their enslaved people. But not before their propaganda was pushed on us (and the world) through their financing of every counter-culture movement. Their alien values have taken over our education, government and unions. Islam is trying the same model on the world to turn us into them.

This is what happens under Central Planning when government and the workers take over a car company. 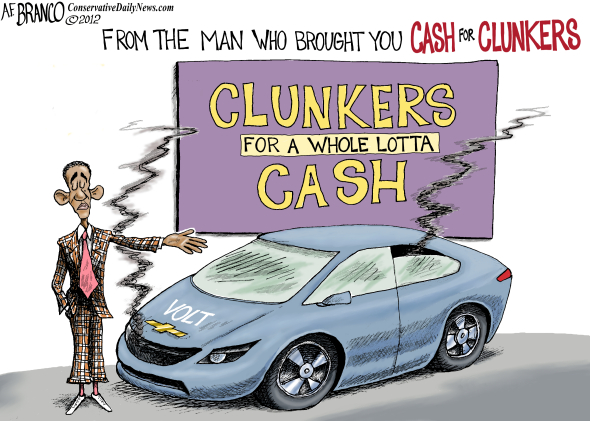 Cost - $250,000+ to the taxpayers for each one sold. Not to mention the lawsuits for the battery fires and the cost of the recall.
Are we doomed?
Not if you take the time to educate yourself and others until we return our system to its root values and constitutionally limited government.
www.TheSocietyProject.org
Posted by BrerRabbi at 2:55 PM No comments: