It all Greek to me 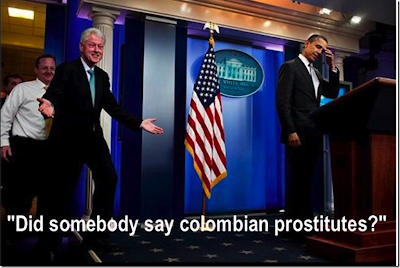 Quick test on how well you were edumacated in school (yes Bush had it right and you'll see why).
Take a look at this page from a popular Social Studies textbook. 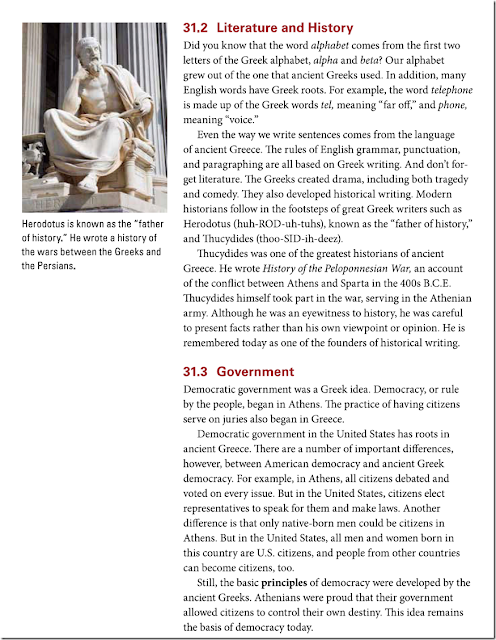 Can you spot the mistakes?  The omissions?
It's not easy because these same inaccuracies have been taught for quite a long time and they are accepted as truths.

Why glorify Greek Culture and present it in such a romanticized light?
Why leave out critical facts?
Why no mention of the Greek moral values and how their culture crashed and burned?
Or mention that non-citizens had no rights and were mostly slaves.
It comes from a penchant of the left to fantasize and romanticize Socialist ideas as perfect rather than the evil abject failures they have proven to be.
"Their government allowed citizens to control their own destiny".  To the Socialists it's all government.
The Socialists who wrote this textbook don't have a clue of individual Natural Rights and duties and that it's the people who constitute the government and give it only limited powers.

Our Federal government had nothing to do with Democracy or Greece except as a disaster to be avoided.
Democracy is the rule of the majority of people in which the minority is always taken advantage of.
No Democracy has ever lasted because the majority become dependent and eventually clamor for more than the minority can provide.

The United States is a Constitutional Republic not a Democracy.
The people do not rule directly. There is a separation of powers.   (although that has since been broken down)
The House Of Representatives shares decision making power with the Senate and the Veto power of the President.
In the USA it is the States who elect our President through the Electoral College not the people directly.

The people were also never to directly elect Senators.   The State legislatures used to elect our Senators before the 17th amendment turned the USA into a Democracy that steals from a minority of earners to support the Majority of dependent.  Dependent people lose character, values, skills and society degenerates.

No offense to the Greeks.
The Greeks did not develop historical writing and Herodotus is not the "Father of History".
Maybe if you begin history with Rome and Greece like the biased people who wrote this textbook.
What is the most widely read history in the world?  The Bible.  The books of Moses were written over a thousand years before the Greeks.
Oh that's right the Greeks considered everything to do with theology to be mythology, an outlook that the Modern Left apply to the Bible.
So to them it is not factual enough to be history.  Uh huh.

They originated Drama and Comedy?  Yea sure, if you begin history at the Greeks.
What is the Bible, the Epic of Gilgamesh? Was there no drama and comedy before the Greeks?
How foolish.

And finally the Alphabet did not originate with the Greeks.
It originated in the Semitic world thousands of years before the Greeks.
Alpha and Beta are descended from Aleph and Bet, the first two letters of the original Semitic language whose closest surviving descendant is Hebrew.

Everything you learned is probably wrong.
Posted by BrerRabbi at 2:27 PM No comments: