USA - stands for "Unbelievably Stupid America". How did we get here? The Reds and the Brotherhood.

Can you spot the inadvertent truth relating to the purpose of the Presidential Spokesman's words: 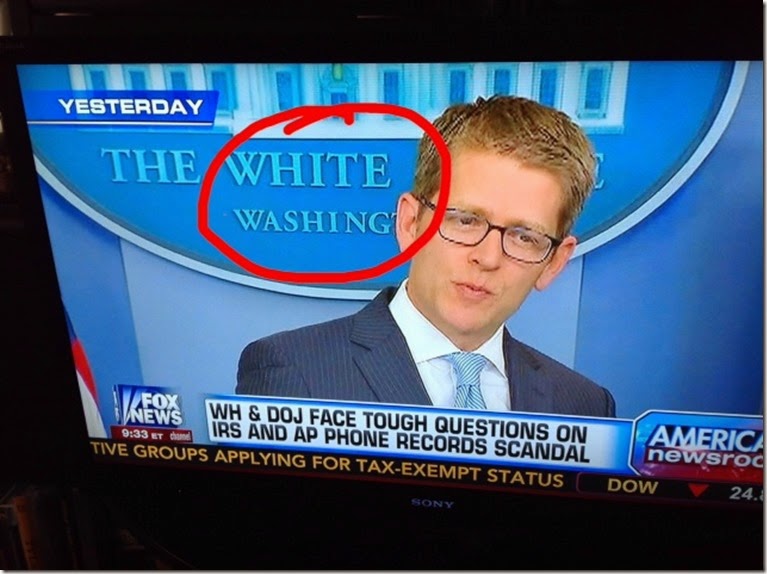 And, uh, Don't look around the corner.
And anyway I, uh, President Obama, knew nothing about it.

Don't blame me, the government is too vast for me to know at all, err... it all.
You can't say that I targeted political enemies with the IRS, like Nixon did.
(Hey Joe, tell them.   CNN and the other lapdogs aren't saying that.  What's that? Bob Schiefer is outraged about us spying on that Fox news reporter Rosen ... but Bob is a Democrat!) No way!  I'm Not Like Nixon.
Look!  I didn't make any tapes.
And uh, look at my face, I'm outraged by this unacceptable behavior of umm... my stooges at ...the IRS, and uh...
I never said "Let me say this... about that".
Nope.  Now calm down.  There's nothing to see here my Media friends.

Certainly not the most Deceptive, Manipulative, Corrupt, Anti-American, tyrannical and yes, even criminal Administration ever.
How did we come to this point?
Communist ideology guided the Progressive Movement's Presidents Wilson, and FDR.  Wilson broke the Constitution with the Income tax amendment (16th) and the removal of all State representation in the Federal Government (17th amendment) He then destabilized our currency through the creation of the Federal Reserve.  FDR hooked the country on Social Spending and a massive government.  From the 40's to the 80's, the Soviet Communists infiltrated America's Unions and Government, spent billions funding anti-war, anti-American, Anti-Religion, Anti-Male, anti-moral protests, creating a drug culture, influencing intellectuals and the Media, and infiltrating our Universities to destabilize our culture, family and economy.

The result of this massive ideological and propaganda onslaught is today's apathetic, amoral, atheist, America-hating, politically divided, victim and entitlement culture.
But wait that's not all.
Virtually unnoticed, until after 9/11, and currently in our faces with the so-called Arab Spring, has been the influence of the Muslim Brotherhood.
In the Arab Spring - aided by the, Muslim and Communist raised, US President's active support (or his lack of knowledge or innocent gullibility and stupidity - whichever you would rather believe), The Muslim Brotherhood has taken over the governments of many of the Countries surrounding Israel.
In case you don't know, The Council on American-Islamic Relations (CAIR) is a Muslim Brotherhood organization.
They spread disinformation, file lawsuits to silence enemies and feature Islamic Radicals at their fundraisers to influence so-called moderate Muslims to come back to the violent Jihad fold.
http://www.clarionproject.org/analysis/cair-books-radicals-fundraising-banquets
More striking are the American Universities that have been infiltrated by the Muslim Brotherhood, spreading their Islamic culture of hate for Jews and America, influencing and protecting terrorists and preparing for their Jihad.
http://www.clarionproject.org/analysis/mb-front-succeeds-partnering-us-universities
Did you know that Sharia law, which denigrates Women and  is contrary to our Judeo Christian morals and our Constitution, governs all Religious Muslims in this country?
For more see:
http://www.clarionproject.org/
Why and How do you fix it?
See www.TheSocietyProject.Org.


Speaking of Islamic infiltration:
The International Red Cross, like the United Nations, is an Anti-Jew, Anti-Israel, Anti-Semitic pro-Islam and terrorist organization, infiltrated and influenced by Islamic hate mongers.
Until 2006, they refused to allow Israel's, Red Shield of David medical service to participate in their organization and did not recognize the Red Star of David symbol (Mogen David Adom – MDA).
Yet they have allowed the Muslim Red Crescent all along.
Even after "recognition", the MDA symbol is still not allowed anywhere in the world, except in Israel, and even then not in the places where Israel has allowed the Palestinian Authority to have independent rule (that the Islamic Hate mongers call occupation, even though these Arabs were rescued in 1967 by Israel from brutal JORDANIAN occupation)
Never donate to them.  Donate to the AMERICAN Red Cross only, otherwise you are funding Islamic terrorism.
Better yet, skip the Red cross entirely and donate to the Salvation Army who are really the ones who do the work that the Red Cross takes credit for.
Here the International Red Cross funds tree planting to honor jailed terrorists.
http://palwatch.org/main.aspx?fi=157&doc_id=8965
Then tries to weasel out of culpability
http://palwatch.org/main.aspx?fi=157&doc_id=9085
The Magen David Adom (Hebrew: מגן דוד אדום‎, abbr. MDA or Mada) is Israel's national emergency medical, disaster, ambulance and blood bank service. The name means "Red Star of David" (literally: "Red Shield of David"). Since June 2006, Magen David Adom has been officially recognized by the International Committee of the Red Cross (ICRC) as the national aid society of the state of Israel under the Geneva Conventions, and a member of the International Federation of Red Cross and Red Crescent Societies.
Posted by BrerRabbi at 11:12 AM No comments: